Daytime TV presenters verbally abused on daytime TV show in campaign to highlight domestic violence
In aid of International Women’s Day on 8th March, Georgian TV channel, Rustavi2 agreed to broadcast a live and powerful feature. The footage of a female presenter on daytime TV show ‘Skhva Shuadge’ being verbally abused by a male producer in the background, for making a simple mistake, makes for uncomfortable viewing.
The film, which was recorded last Thursday, was shared more than 6000 times, and had 200,000 views. In 3 days, it became the most watched and shared film of the month. In a small country such as Georgia, this is a huge achievement. Rustavi2 is the country’s most viewed channel, with 28% market share. It’s weekly news round-up show featured the initiative, with it also being covered by all the major news sites in the country.
Baia Dvalishvili, the film’s TV host and actress said: “Don’t ignore the violence. This is happening every minute, every second. We can hear it behind the walls, we see it, we are looking at it everyday. Let’s hope, that this will end someday.”
"According to statistics, every 3rd women in Georgia experience domestic violence. But no one does anything about the problem. Sometimes people even think that women deserve it. We are very proud that our idea initiated so much society discussion and might become the first step to change," said Anton Demakov, ECD Saatchi & Saatchi Georgia.
The problem of domestic violence is still ignored in some countries, Georgia included. The objective of this campaign is to urge people not to turn away and ignore the issue anymore. The need to face the problem and deal with the problem must be addressed. 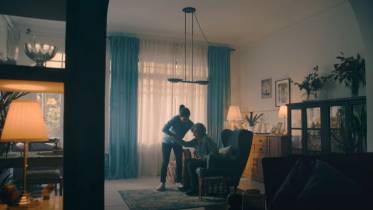